Cybernetics is a transdisciplinary[1] approach for exploring regulatory and purposive systems—their structures, constraints, and possibilities. The core concept of the discipline is circular causality or feedback—that is, where the outcomes of actions are taken as inputs for further action. Cybernetics is concerned with such processes however they are embodied,[2] including in environmental, technological, biological, cognitive, and social systems, and in the context of practical activities such as designing, learning, managing, and conversation.

Cybernetics has its origins in the intersection of the fields of control systems, electrical network theory, mechanical engineering, logic modeling, fuzzy logic, evolutionary biology, neuroscience, anthropology, and psychology in the 1940s, often attributed to the Macy Conferences. Since then, cybernetics has become even broader in scope to include work in domains such as design,[3] family therapy, management and organisation, pedagogy, sociology, and the creative arts.[4] At the same time, questions arising from circular causality have been explored in relation to the philosophy of science, ethics, and constructivist approaches. Contemporary cybernetics thus varies widely in scope and focus, with cyberneticians variously adopting and combining technical, scientific, philosophical, creative, and critical approaches.

In architecture and design

Cybernetics was an influence on thinking in architecture and design in the decades after the Second World War.  Ashby and Pask were drawn on by design theorists such as Horst Rittel,[40] Christopher Alexander[41] and Bruce Archer.[42] Pask was a consultant to Nicholas Negroponte’s Architecture Machine Group, forerunner of the MIT Media Lab, and collaborated with architect Cedric Price and theatre director Joan Littlewood on the influential Fun Palace project during the 1960s.[43] Pask’s 1950s Musicolour installation was the inspiration for John and Julia Frazer’s work on Price’s Generator project.[44]

There has been a resurgence of interest in cybernetics and systems thinking amongst designers in recent decades, in relation to developments in technology and increasingly complex design challenges.[45] Figures such as Klaus Krippendorff, Paul Pangaro and Ranulph Glanville have made significant contributions to both cybernetics and design research. The connections between the two fields have come to be understood less in terms of application and more as reflections of each other.[46] 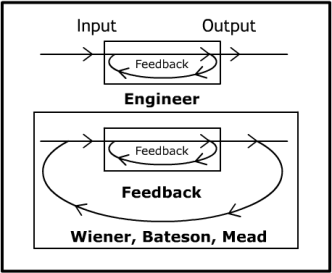 Heinz von Foerster attributes the origin of second-order cybernetics to the attempts by cyberneticians to construct a model of the mind:

The anthropologists Gregory Bateson and Margaret Mead contrasted first and second-order cybernetics with this diagram in an interview in 1973.[29] Referring to the Macy conferences, it emphasizes the requirement for a participant observer in the second order case:

… essentially your ecosystem, your organism-plus-environment, is to be considered as a single circuit.[29]

In 1992, Pask summarized the differences between the old and the new cybernetics as a shift in emphasis:.[30][31]

This website uses cookies to improve your experience while you navigate through the website. Out of these, the cookies that are categorized as necessary are stored on your browser as they are essential for the working of basic functionalities of the website. We also use third-party cookies that help us analyze and understand how you use this website. These cookies will be stored in your browser only with your consent. You also have the option to opt-out of these cookies. But opting out of some of these cookies may affect your browsing experience.
Necessary Always Enabled
Necessary cookies are absolutely essential for the website to function properly. These cookies ensure basic functionalities and security features of the website, anonymously.
Functional
Functional cookies help to perform certain functionalities like sharing the content of the website on social media platforms, collect feedbacks, and other third-party features.
Performance
Performance cookies are used to understand and analyze the key performance indexes of the website which helps in delivering a better user experience for the visitors.
Analytics
Analytical cookies are used to understand how visitors interact with the website. These cookies help provide information on metrics the number of visitors, bounce rate, traffic source, etc.
Advertisement
Advertisement cookies are used to provide visitors with relevant ads and marketing campaigns. These cookies track visitors across websites and collect information to provide customized ads.
Others
Other uncategorized cookies are those that are being analyzed and have not been classified into a category as yet.
SAVE & ACCEPT
%d bloggers like this:
Skip to toolbar